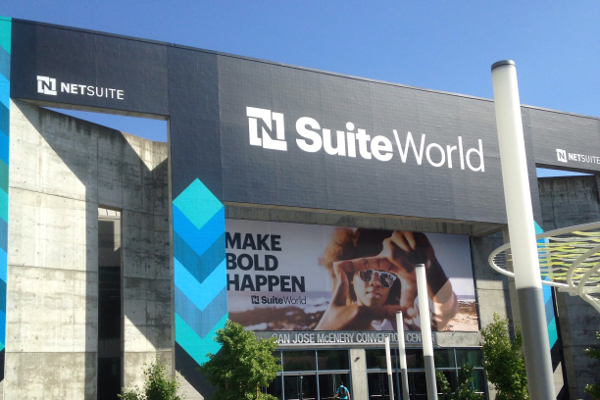 SuiteWorld is NetSuite’s annual user and partner conference and it’s an important event for us to go to as it allows us to enhance our knowledge of NetSuite, learn about the future development plans for the product and to meet and network with 10,000 other partners, developers and users from across the globe.

The theme of this year’s four-day event was Make Bold Happen.

CEO Zach Nelson opened the event with a keynote speech packed with impressive statistics about NetSuite, its growth and its position in the industry.

NetSuite is used by more than 30,000 organisational entities, making it the most widely-used business system in the cloud. It is used by at least one company in each of the 1,540 SIC (standard industry classification) codes; so every type of company really can use NetSuite.

NetSuite is the only ERP system in the world’s top 15 systems that is only cloud-based. In 2015, it grew by 45% in the financial management systems industry, a rate of growth Zach Nelson attributes to the platform’s transaction-centricity, its scalability and its customisability.

The audience heard case studies and endorsements of how NetSuite has helped their companies from: Rob Lloyd, CEO of Hyperloop; Brian Mullins, CEO of Daqri; and Imran Khan, CSO of Snapchat.

Then, President of NetSuite, Jim McGeever introduced the launch of SuiteBilling, the first and only cloud-based unified order to billing to revenue solution.

In another – technology-based – keynote, Evan Goldberg, founder and CTO of NetSuite, explained the latest enhancements to and innovations in NetSuite, including intelligent order management, unified billing and revenue reconciliation, and OneWorld. Existing customers may like to view the full video to understand some of the platform’s improvements.

Evan Goldberg, founder and CTO of NetSuite gives an in-depth look at the NetSuite product’s new announcements and features.

Throughout the event there was an exhibition from software partner companies, allowing us to see what opportunities there are to extend NetSuite for certain customer situations. We always like to make it easier for our clients to achieve what they want to and to get their jobs done more effectively or more efficiently. We already know that no implementation is ever the same. User requirements certainly vary widely. But at an event like SuiteWorld, you can really learn so much by seeing how someone is using NetSuite in a totally different way to how we may have implemented it before.

Overall, we learned that NetSuite is investing in its platform, delivering new, key features and is helping more and more companies to achieve their bold visions. The company continues to aim to help small and medium companies act big.

NetSuite is a unique product and a unique company. What other business would include in their event a rock concert featuring Billy Idol and Ozzy Osbourne? They certainly do make bold happen.

If you would like to make bold happen within your organisation, we’d be pleased to demonstrate NetSuite to you. Please call us for more information on 020 8819 9071 or contact us using the website form.