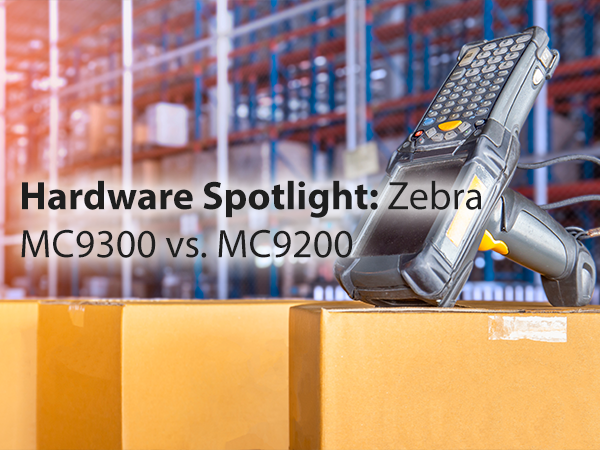 The Zebra MC9300 is an ultra-rugged Android mobile computer, an upgrade of the MC9200. It was launched at the beginning of April 2019 and orders will start to ship towards the end of the month.

It is Zebra’s top of the range barcode scanning mobile computer and has some improved functionality over the company’s previous flagship model, the MC9200.

With more than three million MC9000-series units in use around the globe, the range is the world’s best-selling Android mobile computer for use in the warehouse. Now, the MC9300 represents the next evolution in that range.

To help you decide between these two top-flight devices, we compare their features and show the improvements that Zebra has brought with the new MC9300.

The Zebra MC9300 is the most rugged yet of the MC9000 series models. Built to outlast other devices in its class, it is ready to take on any environment or application. It is suitable for even the harshest of environments: it is virtually waterproof, dust-proof, and drop-proof. So aside from operating in standard warehouses, it is capable of being used in chillers, freezers and in environments with hazardous materials.

The display and exit window are protected by Corning Gorilla Glass, for maximum scratch and impact-resistance.

For maximum processing power, the Zebra MC9300 has an 8-core processor. Combined with its up to eight time more RAM and 16 times the Flash memory of the MC9200, it delivers an ultra-powerful performance in conjunction with your data and voice apps.

The MC9300 has a larger touchscreen than the MC9200. It is a multi-touch 4.3 inch WVGA display that can be operated with a finger, a stylus or even a gloved finger. It also works when the screen is wet.

The MC9300 uses improved battery technology. This gives longer cycle times and also shows real-time battery metrics so that you can better manage your battery use.

While the MC9200 did not have a camera, the MC9300 has a front camera and an optional 13MP rear camera. These can be used to capture photos or video to provide proof of condition, for example.

The MC9300 incorporates extended range capture. This allows you to capture barcodes from 3 inches (7.6 cm) to 70 feet (21.3 m) away. So it’s just as simple to scan products in your hand as it is those right up at the top of your warehouse racking.

Via our partnership with Renovotec, we can supply your Zebra handheld barcode scanners and mobile computers. If you’d like to know more about the Zebra MC9300, download the spec sheet: Zebra MC9300 spec sheet.