A History of ERP 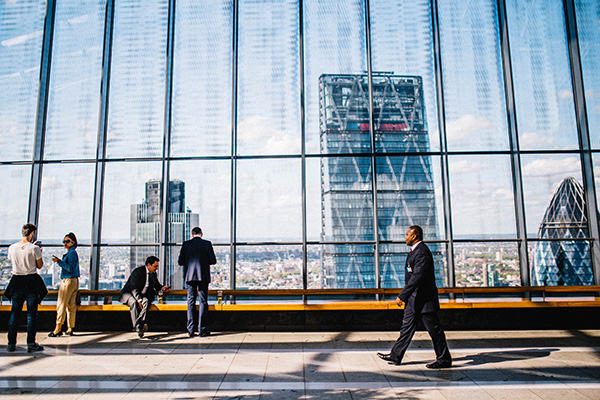 Enterprise Resource Planning (ERP) systems are an integral part of the business landscape these days. They help companies to streamline their business processes and to efficiently manage their operations. But how have they evolved?

As modern factory production increased and computing was born, there was a need to manage and balance production and customer demand. Subsequently, this brought about software known as Materials Requirements Planning – or MRP. These early computing programmes helped plan manufacturing, purchasing and delivery. They helped companies to keep their stock levels low, which in turn reduced the amount of money tied up in inventory.

By 1975, MRP software was running in 700 companies. It was only affordable for the large manufacturers and ran on enormous mainframe computers that didn’t even have the computing power of a present-day laptop.

In 1972, SAP was born in Germany. The company initials stood for “Systemanalyse und Programmentwicklung”, or “Systems, Applications & Products in Data Processing”. It was founded to create business software that worked in real time. In an era of reel-to-reel tapes and punch cards, real-time working was something that hadn’t been done before.

Financial management software was being developed at this time too, albeit in isolation from other systems.

In the 1980s, MRP developed and grew in capabilities, later becoming what many termed MRP II, or Manufacturing Resource Planning. This added more manufacturing processes and greater capability, especially around capacity requirements.

It wasn’t until the 1990s though that the acronym ERP – for Enterprise Resource Planning – was first used. Coined by the Gartner Group, it described software that extended MRP and MRP II to encompass other functionality to do with a company’s “back office”. This included elements such as engineering, finance and accounting, HR and project management.

By the mid-1990s, ERP software was available from suppliers such as SAP, Oracle, JD Edwards and Baan, addressing the core functions of a company.

With the looming issue of the Y2K computer bug and the imminent introduction of the euro, companies in the 1990s scrambled to update their legacy systems. Many chose this time to update their systems entirely by adopting new ERP solutions.

Subsequently, in 1998, NetSuite was founded, with the aim of creating a system that worked across a company and which was delivered over the internet.

In 2000, the Gartner Group again had a hand in the history of ERP when it described ERP II. This, it said, was internet-enabled software that gave real-time access to the ERP solution. It also described software that went beyond a company, to provide management and functionality that helped a company to integrate with systems outside of the business. This involved the integration of supply chain management, customer relationship management (CRM) and business intelligence.

During the early 2000s, interaction via mobile devices evolved and more web-based functionality emerged. Furthermore there was also much consolidation of suppliers. A number of mergers and acquisitions saw the industry transform and go into the 2010s to become dominated by a much smaller number of vendors, including Microsoft, Oracle, SAP, Infor, Sage and NetSuite.

Today, ERP systems are even more advanced. They are often cloud-based, delivered via the software as a service (SaaS) model. And they have remote, web-based access via advanced apps that run on mobile devices. They are extremely flexible and every vendor’s tool is different. But each application provides a company with a powerful, real-time tool that runs a single, shared database of information for the entire enterprise. Modern ERP solutions not only address manufacturing, supply chain, and financial and accounting capabilities, but they also encompass other areas. Today’s ERP systems have: advanced reporting and business intelligence; sales force and marketing automation; CRM; ecommerce; and service and warranty management.

Companies of all sizes and from every industry can implement and benefit from ERP systems. For instance, systems like SAP Business One and NetSuite help staff to be more efficient and help business leaders to manage and run their companies for greater success. We’ve come a long way. Where will ERP take us next? 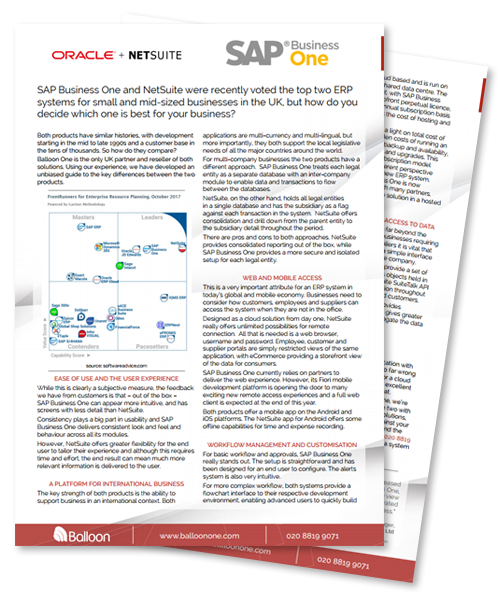 Can’t decide between NetSuite and SAP?

As Balloon One is the only UK partner of both these leading systems, we are able to offer unbiased advice on which solution is best for your specific business needs. Download the comprehensive ‘SAP Business One vs NetSuite’ comparison to explore the capabilities of both ERP systems.