Robot density in the UK in 2022: Is automation the key to boosting productivity?

Despite some progress over the past few years, the UK is still lagging behind other countries in its use of industrial robots — and national productivity could be suffering as a result, according to analysis by Balloon One.

Compared to nations with a similar manufacturing output, we are using fewer robots in industry while failing to achieve many of the same productivity levels.

To help work out whether there’s a link between greater robot density and a more productive industry, we looked at data from the nations with the most robots installed and found out their productivity rate, alongside how much they rely on manufacturing as a percentage of their GDP. We then compared the results with data from the UK, as well as previous data from 2017. 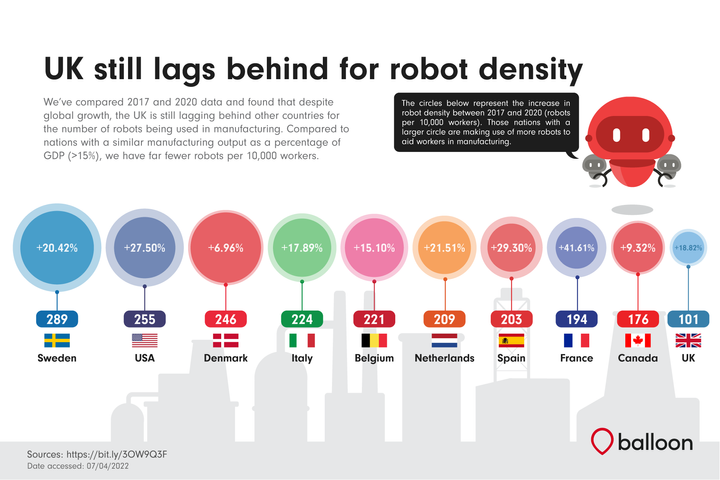 Despite having the lowest number of robots, our GDP per hour worked remains fairly middling at $59.27. This could be because the UK manufacturing industry only contributes towards 9% of our GDP, which when compared to countries like China — where manufacturing accounts for 26% of total GDP — means robot density is likely to have less of an impact on our productivity. Interestingly, China has had the fastest growth of any country when it comes to installing robots between 2017 and 2020, at 153.61%.

So, despite still having the fewest robots, our productivity isn’t the lowest — but it could be much higher. When you compare the UK to countries with a similar manufacturing value, such as the US (11%), Canada (10%), Spain (11%), the Netherlands (11%), and France (11%), all of which have made significantly higher investments in robotics, the majority have a comparatively high productivity rate. Could the UK’s lack of robots be the reason why we’re behind in terms of productivity? 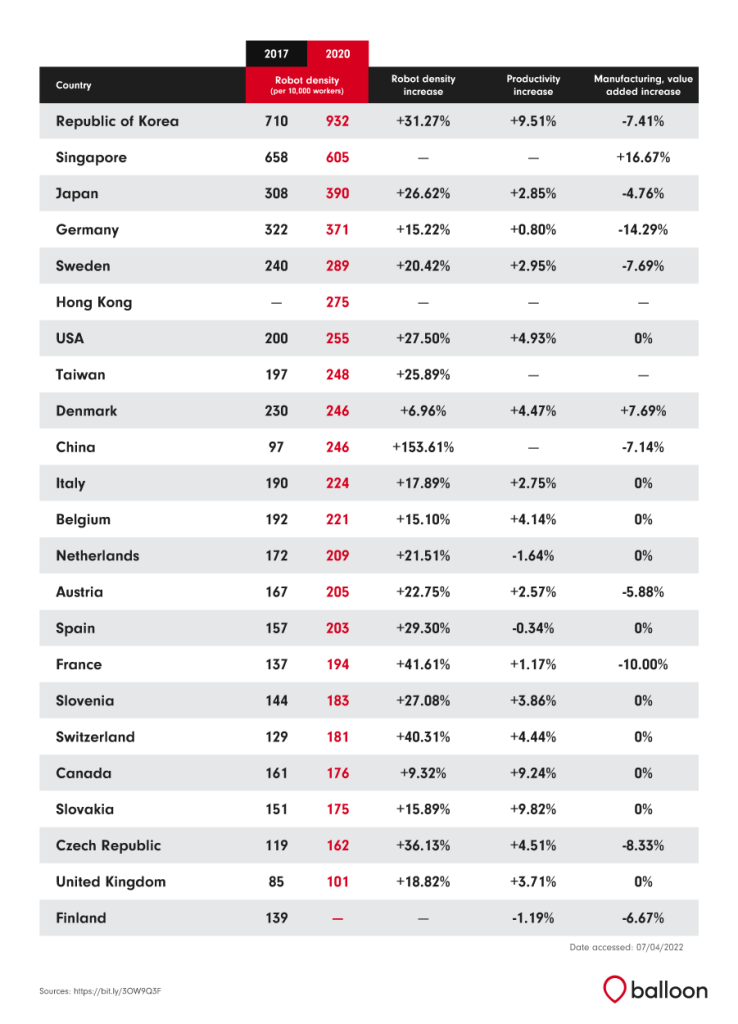 Craig Powell, Managing Director at Balloon One, says: “Although the UK is slowly making progress, and it’s difficult to say for sure just how integral robots are to labour productivity, the evidence suggests that installing more robots may equal a more productive manufacturing industry here in the UK.

“We’re still lagging towards the bottom of the table when it comes to robot density, and our productivity is low compared to other countries too. If we were to follow the lead of our peers and invest more in robotics, it’s not hard to imagine that we could see an upward trend in productivity and even significantly increase our GDP.

“It’s important to remember that robotics is an area that spans all sorts of different tech, from heavy machinery to AI. In addition to industrial robots, the UK could benefit from an increased emphasis on robot technology across the whole of the supply chain, such as autonomous mobile robots (AMR) which are capable of picking and packing. As well as being more efficient than human workers in a lot of aspects, AMRs can assist with more complicated or demanding tasks alongside existing staff to boost productivity in more diverse ways.”

Brexit will no doubt contribute towards an increased demand for robots beyond 2020, as automation is more frequently used to replace foreign workers. What’s more, the UK manufacturing industry now benefits from tax relief for investments in machinery, so between 2021 and 2023 (which is when this particular scheme ends), we could see a significant boom in robotic installations.

Of course, the pandemic and ensuing lockdowns, staff shortages, supply chain disruption, and delays to production will also have had a significant impact on the manufacturing landscape more recently. Over the next few years, as the data becomes available, it will be interesting to see just how much disruption — or even progress – Covid-19 has caused to robot density and productivity in the UK manufacturing industry.

To compare the impact of the UK’s industrial robots, we looked at data from the International Federation of Robotics, OECD and the World Bank. We then identified the top countries for robot density (number of industrial robots per 10,000 workers), productivity (GDP per hours worked), and each country’s rate of reliance on manufacturing (value added, percentage of GDP).

We then compared the UK to ten other nations that have similar levels of manufacturing (10–15% of GDP, value added). Having previously done this research with 2017 data, we also compared the 2020 findings to our previous research to include rates of growth.