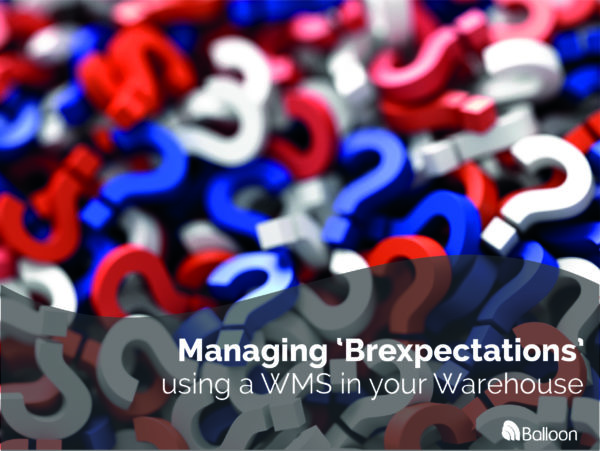 Posted at 16:29h in Blog, Warehousing by Claire Kerr
2 Likes

The impact of the build up to Brexit has been felt for some time now. It has been a long time coming –  we’ve been anticipating it for more than three years. And although the Brexit chaos has dragged on, whichever side of the political argument you fall on, the delays have at least given warehouses and distributors a chance to consider the ‘Brexpectations’ for their operations, and to plan for them.

What is the impact of the build up to Brexit for warehouses?

One of the most significant impacts of the run up to Brexit has been the stockpiling of goods. As we approached the original deadline, at the end of March 2019, it was clear that people and businesses were stockpiling goods. It was never entirely evident if stockpiles were going to be necessary. But it’s not a scenario anyone has ever been in before, so no-one was quite sure if the lorries would get through, if the supermarket shelves would be replenished quickly, or if pharmacies would have enough stock of vital medications.

In an attempt to mitigate the issues that many were anticipating – the Brexpectations, if you like – warehouses quickly filled up and additional space in other facilities became scarce. And this is a situation that doesn’t seem to have diminished either. The CEO of the United Kingdom Warehousing Association (UKWA) said in July that, “There is little available space. The market, as represented by our members, is virtually at full volume.“

This has caused worry for many distributors. Their warehouses are full, but they haven’t been able to tap into the additional short-term space needed to take on their stockpiles. And it’s been made worse by the timing. Coming out of the EU on October 31st without a deal seems more and more likely, and that falls squarely in the run-up to the busy pre-Christmas period.

Many businesses have had to restructure, in order to ensure their operations will be as ready as possible to provide goods without any disruption. The British public seems to expect that they will still be able to get all the goods they want, yet they are also known for compounding situations like this by panic buying and stockpiling even when their isn’t yet a shortage.

It seems that food and drugs businesses have been most impacted. Press stories and leaked cross-government “worst case scenario” studies alike have exacerbated the fear and put pressure on companies to demonstrate that they will be Brexit-ready.

But there has been some hesitation to stockpile again, after the experience of companies earlier in the year. Between April and June 2019, as companies offloaded the goods they had stockpiled ahead of the original March deadline, the economy shrank 0.2% – the first time it had contracted since the financial crisis of 2008-09.

How can a WMS help with planning for Brexit?

Distributors have had to take reasonable measures to protect their businesses from the impact of Brexit.

But many companies haven’t made some basic preparations. Less than a month ago, the Chartered Institute for Procurement and Supply (CIPS) reported that, “Just 22% of UK companies with EU suppliers have completed all four steps necessary to export to the EU in the case of a no-deal Brexit.” This means that they haven’t completed the necessary paperwork, acquired an EORI number or made other provisions to ensure an agile and flexible supply chain.

Aside from these basic preparations, stockpiling has been another way that companies have been preparing. But even if they have stockpiled as much as space will allow, controlling this extra stock may be harder for the small and medium sized warehouse operations that don’t have the software to support them.

If you’re a food company, you’re used to delivering your most perishable goods in a just in time fashion. With ports delays and customs hold-ups, fresh food may take longer to get into your warehouse after Brexit, meaning you need to ship it out more quickly than usual. Having a warehouse management system (WMS) is vital here. It can help you ensure you can get goods out of your warehouse as speedily as possible. And that you can manage the putaway, picking and despatch as seamlessly and quickly as possible.

And holding excess inventory is an expensive business. Distributors are having to weigh up the extra costs with the potential impacts to their reputations when they can’t meet their customers’ demands for Spanish-grown tomatoes in the middle of winter.

Using a WMS helps improve efficiency for all aspects of warehouse operations. A WMS can help optimise warehouse processes, speed up response times, reduce error rates and optimise the use of resources. While not mitigating all potential Brexpectations, a WMS certainly goes a long way in the struggle by bringing a more rapid throughput.

If Brexit has pushed your Brexpectations to the edge, there’s an ‘Edge’ that may be able to bring you back. Warehouse Edge from HighJump can be rapidly implemented – not in time for 31st October 2019, sadly – but often in as short as three months. For more information, call us on 020 8819 9071 or get in touch.