Intermodal freight transport refers to the movement of goods in a single container, but using one or more methods of transport and without handling the goods.

Specific, standardised containers are used, made to dimensions and standards as set out by the International Standards Organization (ISO).

These can then easily be carried on lorries, trains, container ships and airplanes, and can be moved between the different types of transport. 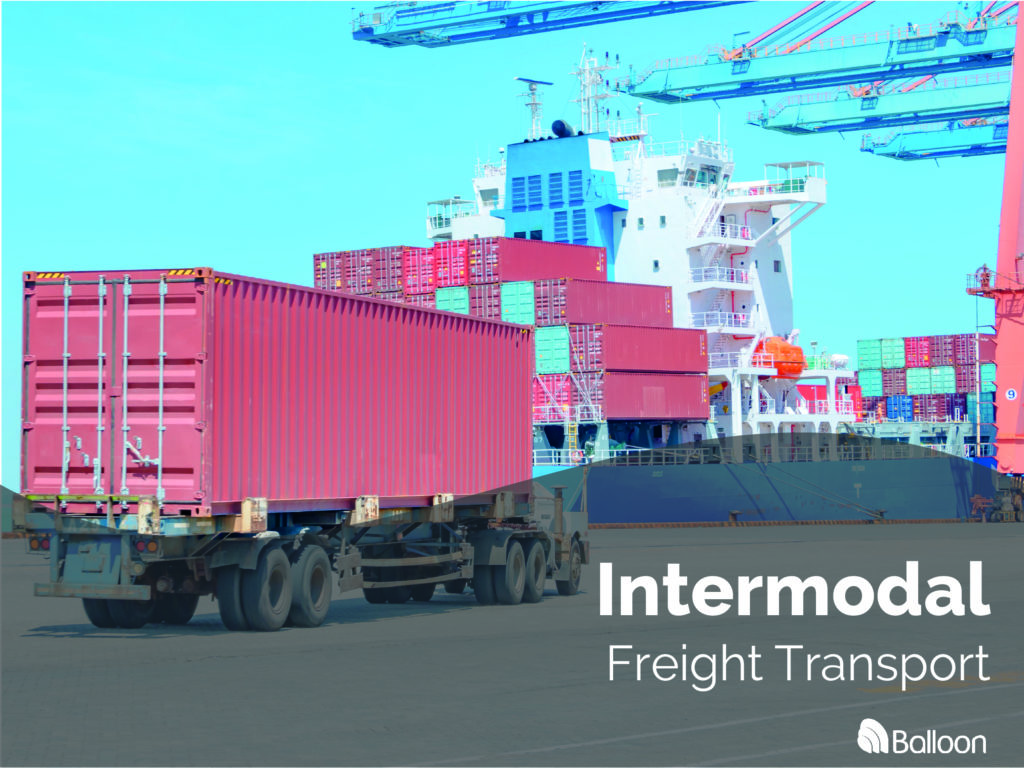 ISO containers are typically rectilinear boxes made of steel that meet ISO standards. They can be fully enclosed and accessed via doors at the rear, or may have open tops for filling from above.

There are also tanktainer versions, which are the same dimensions as a standard container, but which incorporate a tank for conveying liquids, powders or gases.

Flat rack containers are designed for heavy loads or for carrying goods that need to be loaded from the sides or above.

Refrigerated containers are insulated to safely transport temperature-controlled and frozen produce. As well as temperature, some carriers will also maintain levels of oxygen, carbon dioxide and humidity for distributors, in order to manage the ripening process so that produce can arrive fully ripe and ready for sale.

To maintain uniformity, containers are nearly always the same height and width. But they can vary in length, with the most common lengths being 20, 40 and 45 feet.

Swap-body containers are used for journeys that involve both road and rail transport and can be switched between modes of transport from above using a straddle crane. Swap-bodies often have legs that can be folded away when not in use.

The RoadRailer brand of trailers convert from road-transported articulated semi-trailers into rail-conveyed wagons.

The road trailer is converted by retracting its wheels and then placing a railway bogie underneath. The wheeled trailers can attach to each other, forming the train.

An unaccompanied trailer is one that is a lorry semi-trailer that can also be used on roll-on roll-off (RORO) sea ferries and railways.

The trailer does not need to be adapted and neither the driver nor the main part of the lorry is required to accompany the container, thus reducing costs.

For maritime use, a tug unit with a hydraulic mechanism lifts and moves the trailers on and off the ferry.

For road to rail use, the trailers can piggyback onto specially constructed rail wagons.

By sea, most intermodal transport is carried by cellular container ships. These are purpose-built ships that can carry thousands of containers, stacked four or more high on the main deck.

RORO ferries are used on shorter journeys and carry road vehicles an unaccompanied trailers. Some are designed to transport rail wagons and have railway lines on the decks to aid in movement of the train wagons.

River barges can carry containers and vehicles and are used on longer rivers such as the Mississippi, the Nile and the Rhine-Main-Danube canal.

A rolling motorway is the term used where lorries drive onto the train for the journey, then drive off at the end. One example of this is Le Shuttle, which connects the UK and France via the Channel tunnel.

Piggyback trains carry unaccompanied trailers and RoadRailers are made up of trucks that have been converted trucks into rail wagons.

In the USA and Australia, double stacking is common. This is where two wagons are stacked on top of each other. It is the most effective use of train space on long rail journeys, but is not possible within the EU, due to loading gauge restrictions.

A ferrywagon is one that can be loaded straight onto a train ferry.

By road, skeletal and extendable trailers are used for intermodal transport.

Skeletal trailers are articulated semi-trailers made for carrying ISO containers. The container forms the body of the lorry when connected to the vehicle.

Extendable trailers, or slider trailers, can be extended or shortened to accommodate the right length of container to be carried.

To reduce road congestion and limit emissions, investment into intermodal transport of freight is important for many countries worldwide, including the UK.

The Channel Tunnel, for example, has significantly opened up the transport of intermodal freight into Europe.

The UK government has also championed the development of Strategic Rail Freight Interchanges (SRFI). These are warehouse and container handling facilities that are interconnected by rail. The aim is to introduce longer and heavier trains, and so the facilities to handle the storage and transfer of cargo will be needed to accompany them.

The benefits of intermodal freight transport.

Containers allow for a swift transfer between transport types, speeding up the overall transport of the cargo. Increasing the speed of transfer within the logistics process is a key aim for distribution managers. Where delivery times are reduced, then cost savings are made and profits are increased.

Costs are also lower when it comes to inter-continental transport, certainly when compared with road transport, for example. In this way, intermodal transport is ideal for transporting cargo across large land continental masses.

The ease with which intermodal freight can be handled is demonstrated by the fact that as much as 90% of the world’s non-bulk cargo is transported by container.

With no handling of the goods inside the containers, the transport process is more secure. So, intermodal transport limits opportunities for damage, theft or contamination of the goods.

Containers can also be tracked and traced throughout their journey. Not only can their progress be monitored, therefore, so that delivery times can be predicted, but this also gives a view of who has handled the containers and when, helping with insurance claims or insight into storage and transport conditions.