Warehouses of the Future: Dark Warehouses.

Once upon a time, warehouses were staffed with people. Now though, they are increasingly run via automation and robotics. This is what a dark warehouse is. It’s not so much that the warehouse doesn’t need lights. Of course it doesn’t; unlike humans, robots don’t need light to be able to operate. But it’s more that “dark” means an absence of human input. They are termed dark warehouses because they theoretically could operate in the dark.

Are dark warehouses the future? Read on to find out more about what they are and how they can be used. 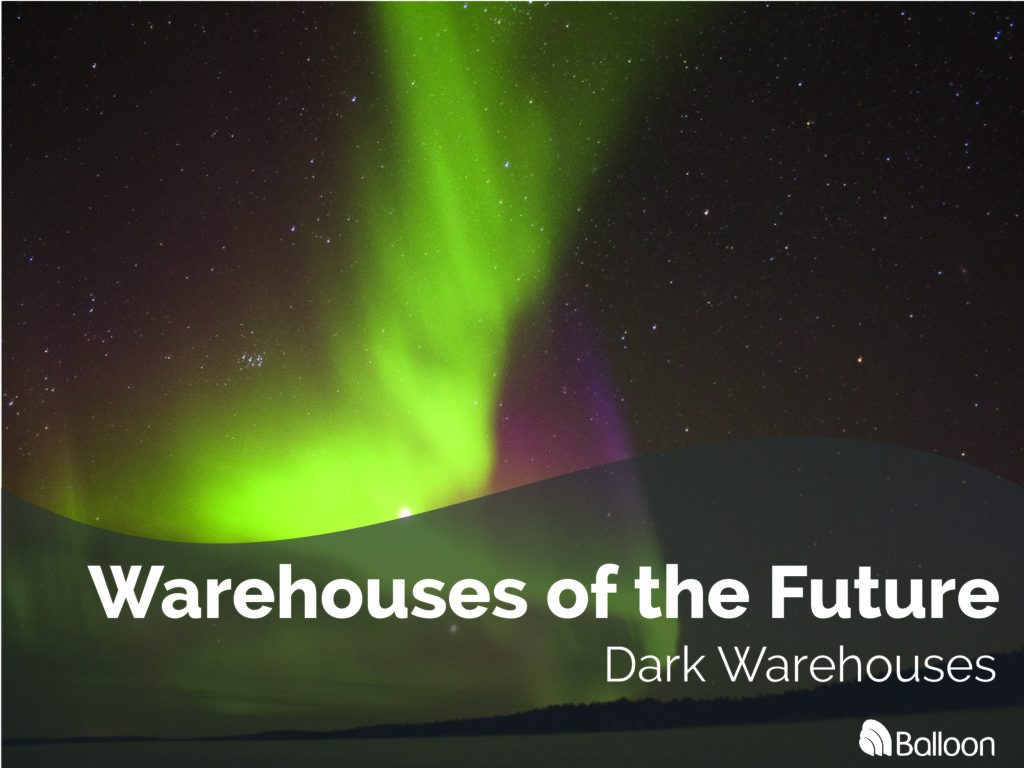 What are dark warehouses?

Dark warehouses are ones in which human input is limited. Instead of workers, the bulk of the work is done using robots and automated control systems.

After the receipt of the goods is when dark warehouses comes into their own. Once scanned by humans as received and therefore logged into the Warehouse Management System (WMS), goods can be put away into storage. Robots can putaway goods and also later automatically pick and deliver goods or full orders to packing stations. Here they are packaged – usually by humans again – and despatched to customers.

Of course, some elements of the distribution process require human involvement. Receiving of goods isn’t fully automated. But the putaway, picking and packing can be fully automated. Robots can operate in isolation, following pre-designed routes around the warehouse, or using ultrasound or infra-red sensors to avoid equipment and other robots.

Grocery retailer Ocado uses a grid system, where crates of goods are stacked on top of each other, up to 17 high. On top of this grid of boxes sit the thousand or so robots, which are guided back and forth to find the goods they need to fulfil the order. They pick the designated crate and deliver it to a packer, who selects the required number of goods from inside, then sends the robot off to stack the box once again.

There’s no human logic behind how the different goods are stored. A human would probably store similar goods together: dog food with cat food; shampoo with hand soap. But the robots don’t need to work like that. So instead, frequently purchased goods are put nearer the top of the stack, and items bought less often are placed towards the bottom. This makes it faster to picker the goods that are most used.

Notwithstanding the recent fire at one of its facilities, Ocado’s automation has been a successful tactic. It has allowed it to process tens of thousands of orders per warehouse, per week. And it’s even sold its ground-breaking technology to other supermarkets, including Canadian, French and Swedish chains.

This sort of grid system is particularly suitable for certain products. In the case of Ocado, workers assemble orders together and they are packed into bags inside plastic carry bins. But if your goods are typically ordered singly and can be packed in despatch-ready packaging, then they can easily be picked, have a label affixed and then sent straight for distribution.

Why would you need a dark warehouse?

One of the major reasons for having a dark warehouse is to cut cost. And it’s not just the electricity cost of the lights, if indeed you do literally operate your warehouse in the darkness.

But robots reduce staff costs too. While some employees are still needed to manage the process, and to run the receipt of goods and the packing of orders, no operatives are needed for picking. Some staff will be required to maintain the robots, but an automated warehouse uses far fewer staff than a typical warehouse does, so overall labour costs are dramatically cut.

Efficiency is further enhanced thanks to the high productivity of robots. Robots don’t take lunch breaks, nor chat idly at the water fountain, nor slack off near finishing time. They can work non-stop 24 hours a day, seven days a week. They can bring goods quickly to packing areas, operating faster than people could walk to collect them, for example.

An automated warehouse run by robots also optimises storage space. Storing goods in bins stacked on each other and accessed from the top by robots eliminates the need for aisles in the warehouse. This means you can store a much larger volume and variety of products. In turn, the land and warehouse space you require is far smaller – and therefore less costly. Additionally, with a smaller warehouse, operations don’t always need to be established in out of town areas. Smaller warehouses can be set up closer to, or even inside, towns and cities, reducing transportation costs.

Equally, this kind of stacked grid system is very scalable. If you want to grow, you can simply add to the grid with more crates.

What steps can you take towards establishing a dark warehouse?

The first process when looking to establish a dark warehouse would be to thoroughly audit your business. You need to analyse whether it would benefit from automation. You’d want to define what costs savings and efficiency gains could made. For many warehouses, automation is never a downside. And in facilities with a large volume of items being picked and despatched, the productivity and cost gains are clear.

The next stage would be to investigate automated storage and retrieval systems. For your own operation, it may be that your needs are simple, with a conveyor system, or robots that deliver picked goods to packers. Or maybe you have the type of business that would benefit from a full-on Ocado-type solution.

Next comes designing the interconnected system. You need to link equipment like robotic arms, conveyers, shelf sensors and self-guided robots with the technology that makes them operate and able to talk to each other. This would generally involve linking a Warehouse Control System (WCS), a Warehouse Management System (WMS) and your Enterprise Resource System (ERP).

If you’d like any assistance with dark warehouses, our warehouse consultants are experienced in designing systems that link together the software and the automation. Call us on 020 8819 9071 or get in touch for more information.