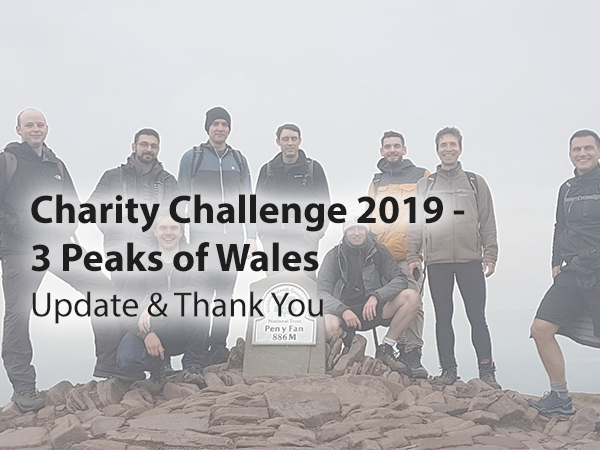 30 May Charity Challenge 2019 – Welsh Three Peaks: Update and Thank You

For Balloon’s charity challenge 2019, a couple of weekends ago, a group of staff took on the Welsh Three Peaks Challenge in aid of Alzheimer’s Society.

The success of last year’s challenge to climb Ben Nevis gave the team a real boost in the run up to the weekend. Most of those from last year had once again decided to take part, and the team doubled in number, with ten taking part this time around. 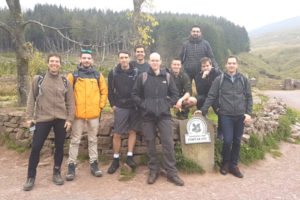 In preparation, everyone tracked their daily steps and tried to improve their numbers in the weeks leading up to the challenge.

Then, on Friday 17th May, the time had come to set off for the countryside of South Wales.

The group decided to scale Pen Y Fan first. As it’s considered the easiest of the three mountains, everyone felt it would provide a good warm-up ahead of the more challenging climbs.

Naturally, the team separated into smaller groups. There were those who wanted to put their heads down and quickly complete the climb. And those who preferred to take their time and enjoy the wonderful Welsh scenery. 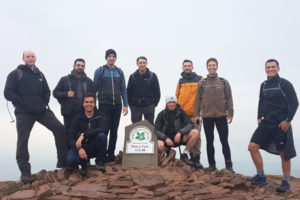 At the summit of Pen Y Fan

One of the team, Harry McCombe, said, “Reaching the top gave us a real sense of achievement and made us eager to move onto the second peak. But as our next climb wasn’t until early the next morning, we decided to cheekily climb a nearby mountain, technically raising our challenge to four peaks.”

After the two climbs, the team made their way to North Wales to set up and rest before an early rise the following morning.

The next day, despite the early 5:30 a.m. start, everyone was surprisingly ready and eager to get going.

The ascent of Cadair Idris began just after 7:00 a.m. Within the first ten minutes, everyone realised that this would prove to be a harder challenge than the climb the night before.

The way constantly shifted between standard hiking and rock climbing. But nonetheless it was a challenge everyone felt confident in completing. After an hour and a half, the group reached the peak, and spent twenty minutes there, bolting down as many energy bars as humanly possible. 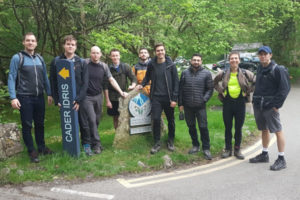 Then they began the descent, knowing in the back of their minds that the hardest climb was yet to come.

At around 9:30 a.m., the team made it back to the van. After a welcome Welsh breakfast, they set off for Snowdon, the highest peak in Wales.

The ascent of Snowdon started at midday and by now there was rain and strong winds. Despite the mountain being the most difficult of the three, it was the most popular among tourists and local hikers and the climbers were passing other groups almost constantly.

Continued Harry proudly, “After an hour and forty-five minutes of slippery rock surfaces, tired legs and more energy bars, we made it to the highest point in Wales and completed the Welsh Three Peaks. Even though we really did four!”

After enjoying a drink at the summit café, they began the descent. With more than enough time to complete the challenge in 24 hours, they opted to take the longer but more scenic route.

Completing the challenge came with a great sense of accomplishment and pride for everyone. 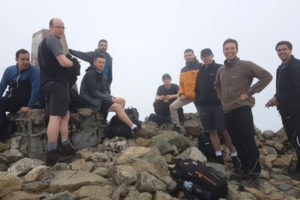 At the summit of Cadair Idris

Harry reflected, “Looking back at all three climbs, while Snowdon was the most challenging, all three were enjoyable in their own unique ways. Pen Y Fan was a great introduction to what was to come, and gave an opportunity for everyone to get into the right mindset. And arguably, it had the best view from its peak.

“Cadair Idris was the perfect balance between rock climbing and hiking and was isolated enough to enjoy the lovely Welsh scenery without having to manoeuvre past other groups all the time. And Snowdon unquestionably was the mountain that everyone felt the most sense of pride for completing – due to its difficulty.”

Balloon’s charity challenge 2019 was in aid of Alzheimer’s Society. The good cause was always in the back of everyone’s mind, acting as a silent motivator to keep pushing and to complete the challenge successfully. 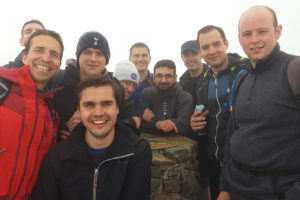 At the summit of Snowdon

Harry joked in conclusion, “The toughest part of the whole trip was getting back to London from Wales. The motorway was closed and it took us six hours – it was exhausting!”

The Balloon team successfully achieved its £5,000 fundraising target and everyone at the company would like to thank friends, family, suppliers, partners and clients that donated to the very worthy cause. The fundraising page will remain open until 19th June in case anyone else would like to donate.

The team made a short video to celebrate the accomplishment: