The Value of 2D Barcodes 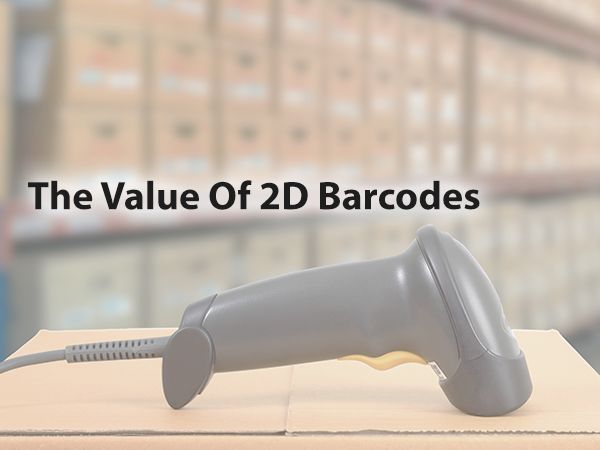 03 May The Value of 2D Barcodes

2D barcodes are invaluable. They represent a significant advance over traditional 1D barcodes, the linear ones with the varying widths of vertical lines. Thanks to the amount of data they can store, they are set to become the norm in warehousing.

The invention of the barcode

Barcodes were patented in 1952, by Americans Norman Joseph Woodland and Bernard Silver. They based their invention on Morse code, extending the dots and dashes vertically to create thin and thick bars.

It took another 20 years though for barcodes to become commercially successful, when they began to be used for scanning items for sale, initially at supermarket checkouts.

Barcodes are simple, effective and can be implemented at low cost. They have become universally used in retail and ecommerce to identify products and their prices – both in warehouses and at point-of-sale. And they’re widely used in healthcare for tracking medicines; in leisure and entertainment on admittance tickets; and in all types of commercial travel on tickets and boarding cards.

1D barcodes were standard, until RFID technology paved the way for the scanning of more complex barcodes, which could contain a far greater amount and type of information.

What are 2D barcodes?

1D linear barcodes can only store text, with a limit of about 20 characters. They are made up of a series of parallel lines of different thickness, with varying width gaps between them. They typically tell the scanner just a few pieces of information – perhaps the product type, the product code and the manufacturing code of an item.

2D barcodes on the other hand are more complex in make-up. They are made up of stacks of linear codes, arranged one of top of the other into a square or rectangle. Visually they look like they’re made up of dots, rectangles, hexagons and squares – all forming a unique geometric pattern.

Known as Code 49, the first 2D barcode was created in 1987 by David Allais. There are now many different types.

2D barcodes can store up to around 7,000 digits or 4,000 text characters. They can consist of alpha-numeric or ASCII characters, as well as images and voice data. Because they can store so much information, they don’t need to connect to a reference database. All the information is stored within the barcode itself. This makes them ideal for warehouse locations, especially large facilities or remote sites, where batch information and traceability data can be instantly determined.

The different types of 2D barcodes

But there are others too, such as MaxiCode, which was originally used by UPS on packing slips; Aztec, which can encode small images; and JAB Code, which is a coloured 2D barcode.

2D barcodes are also known as quick response codes, because with just a rapid scan they can tell you so much.

Why 2D barcodes are valuable in the warehouse

In ecommerce and distribution businesses, they are essential. They store so much vital data that tells an operative about the item in question.

2D barcodes can store batch details and an assigned location, which is key to determining traceability of stock. And because all the necessary information is included in the barcode itself, on-the-spot audits of can be carried out on the warehouse floor with just a scanner and a mobile computer.

Although they inherently store a large amount of data anyway, 2D barcodes can also link to external sources and import data from them. For example, scanning a 2D barcode may pull information from a Microsoft document, or from a database or other type of file. This vastly opens up the amount of data that can be derived from a single scan – you can extract an almost limitless amount of information.

With batch and expiry data, improvements in stock management are possible. This is particularly so in food and drink businesses, where it’s imperative to be able to identify best before dates, for example.

Are you using 2D barcodes?

Are you using 2D barcodes in your warehouse? If not, you could be missing out on greater productivity and efficiencies that could dramatically improve your operation’s profitability.

If you want to find out more about how 2D barcodes could help your business, speak to one of our warehouse consultants. Call us on 020 8819 9071 or get in touch.