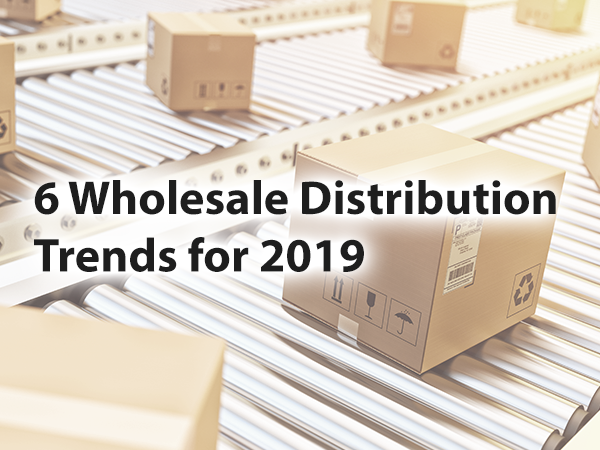 What does 2019 have in store for companies involved in wholesale and distribution?

Last year, we predicted that the focal points of distribution trends for 2018 would be technology and customer-centricity. We foresaw an increase in the use of warehouse robotics and automation. And we felt that distributors would increasingly look to put their customers at the heart of their operations.

Our predictions have been realised. But how will the supply chain landscape change? What are the key trends for 2019?

For the past decade, China has been a global manufacturing force. Its cheap manufacturing and labour costs attracted companies that were suffering a squeeze on their costs after the 2008-09 recession.

But the current trade conflict between China and the US looks set to change the balance of power somewhat. Faced with increasing import tariffs, American companies will either have to bear the increased business costs or switch manufacturing suppliers. To avoid taking a hit in their profit, it’s possible that they will perhaps look to other Far East countries, or even bring their operations back home.

This will likely leave China looking for opportunities to fill the gap. And other countries, like the UK, could see increasing trade with China. While the Americans will be learning Vietnamese or Malaysian, could we Brits be continuing with Cantonese lessons for a while longer?

Maybe not. Western brands are weakening in the Chinese market. Apple, for example, recently announced a 4.9% year on year drop in revenue, which it blamed on a slowdown in the Chinese economy.

Europe is seeing its own economic struggles too. It has to contend with an impending Brexit, “yellow vest” protesters in France angry about rising fuel and living costs, and a slowdown in the German economy.

2. A coming of age for Blockchain

Blockchain suffered a bit of a reputation battering last year. Its most well-known use is cryptocurrencies. And Bitcoin, Ethereum and Ripple all suffered a dramatic price crash in 2018.

But with values now back to around where they were before their rapid rise in value the year before, the cryptocurrency market has now stabilised a bit more. And that has meant that the blockchain platform itself is now free from the more adverse attention it had been getting.

So blockchain technology is back on the agenda for the more forward-thinking distributors. As a single distributed ledger that stores details of the transactions and participants in the supply chain, it provides an accurate, immutable platform. Aside from the record-keeping capabilities, it also allows transactions to be processed quickly and in high volumes. What’s more, there’s only ever one record of an item of stock. So, since stock cannot exist in more than one place at a time, when you move a product from “storage” to “in transit”, the status will update almost immediately for all participants. This accuracy and traceability – added to the speed and efficiency – could prove to be an attractive proposition for cost-conscious distributors.

If you’re a regular internet shopper, you’ll be very familiar with the general delivery times offered by other distributors. Long gone are the 10-day waits for a delivery. The norm now is for shipments to take just a couple of days – or next day if you’re prepared to pay a premium for it.

But with Amazon’s Prime Now two-hour delivery service, the landscape has changed again. Customers are becoming accustomed to receiving their purchases the same day. And it’s likely that we will see the rest of the industry scrabbling to imitate this. More and more companies will compete on delivery times in a bid to win customers. So a general move to rapid delivery timescales can be the only result.

This will have a knock-on effect of increasing the focus on multi-channel transport management. Distributors will seek all avenues that will get their goods to their customers quickly. So, there’ll be more companies using both internal fleets as well as external carriers.

As customers are exposed to different delivery carriers and systems, they become ever more savvy about which are the best practices. They will demand the best when it comes to visibility about their order, the type and frequency of notifications they receive, and general transparency about their ecommerce purchasing.

Distributors that align their ecommerce and transport management systems will be able to deliver this customer transparency.

Economic pressures are forcing distributors’ hands. They need to reduce their costs and improve their productivity. To do this effectively, wholesalers and distributors are recognising that it’s vital to invest in transport management software (TMS).

Commentators have noted too that companies are investing almost exclusively in cloud-based technology for new TMS solutions. The cloud is less expensive and doesn’t require laborious updates.

The growth in the TMS market – and in cloud TMS in particular – will continue as economic pressures squeeze distributors’ profits more and more.

Of course the big unknown is Brexit. Currently (as of mid-January 2019), there’s still no deal. The government has survived a vote of no confidence. But there’s still no consensus in parliament about how the negotiations should proceed.

A no-deal Brexit would bring changes to customs and excise procedures that will impact all companies doing business with the EU. It will mean the introduction of tariffs on many goods and the use of non-preferential World Trade Organisation terms.

Leaving the EU not only brings greater administrative and financial burdens, it may need a rethink for many on just-in-time practices.

Without any firm details about Brexit, distributors can’t make important supply chain decisions. So the waiting game will continue. In the meantime, companies will have to sit out the uncertainty while they shore up their contingency plans and see how they might put a greater focus on domestic trade.

Against the geopolitical background of trade wars and Brexit uncertainty, companies will have to be more innovative. To grasp all opportunities, they will need to be more efficient and will have to embrace new ways of working as well as new business partners. And employing flexible but integrated supply chain systems will be key to managing the changes – both anticipated and unforeseen ones.