Picking equipment: person to goods vs goods to person.

With the advancement of robotics technology, the traditional method of picking goods is losing traction. No longer does the picker need to travel to each SKU one by one, but instead goods can be brought to the picker. Of course, there are pros and cons for each method of picking, but here we look at the equipment that allows each type of picking practice. 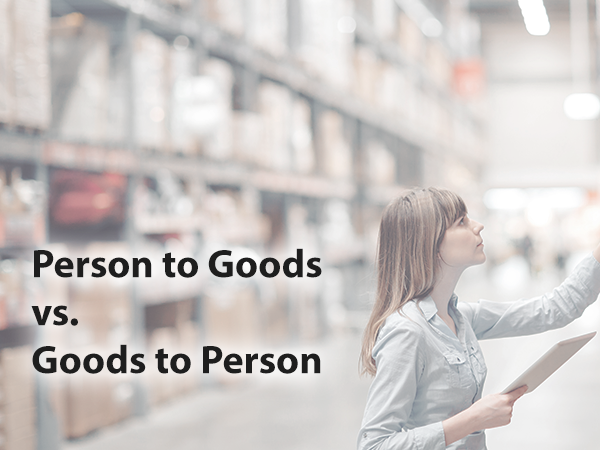 speak to an advisor

Person to goods is the traditional picking method. Order fulfilment is carried out by pickers that travel around the warehouse, going to the products one by one.

To improve productivity and increase accuracy, other strategies can be used with a person to goods approach.

The equipment needs for person to goods picking are low. Trolleys or carts are used by manual pickers, and where goods are larger or heavier, forklift trucks are needed. Many operations will use handheld RF devices to scan selected items, and pick to light or voice-directed picking can help reduce the incidence of mispicks.

Also known as “goods to picker”, with the goods to person approach, the warehouse operatives remain at their designated stations and the items for each order are brought to them. Using a Warehouse Control System (WCS), machinery can effectively be controlled to automate the picking process, bringing goods directly to the operatives.

There are different ways of bringing the goods to the manned stations. In some cases, a full tray of items is brought and the picker removes the quantity they require. Alternatively, in an even more automated scenario, robotic equipment picks and delivers the correct number of items.

There is a variety of equipment that can enable a goods to person warehouse strategy.

Carousel systems automate the picking process and are best for small items or for picking within assembly operations. Pick to light or voice-directed picking can help speed things up even more, and add a greater level of accuracy for picking.

Conveyors have been around a long time and are widely used. The Amazon facility is well known as a model example of this sort of technology.

It’s robots though that offer the greatest level of automation. Using high density storage, an automated storage and retrieval system can employ robots to fulfil the picking duties. One highly automated version of this strategy is Ocado’s Smart Platform with its 1,100 robots.

With faster, more accurate picking, and a need for less labour, many robotics systems are estimated to bring a return on investment within two years. By supplying its robots via an “as-a-service” model, one bot manufacturer, Locus Robotics, ensures that most customers see a return within a month. By generating a two to three times uplift in picking productivity, the robots reduce the expense of picking by 25-40%. And without huge upfront capital costs for equipment, the returns are very quickly made.

Which is best: person to goods or good to person?

A distributor will always need to select the best order fulfilment strategy for their own operation. Basing the choice on the goods stored, the frequency of sales and the costs of running the operation. And to underpin that, it’s clear that a rigorous ROI analysis should be undertaken

With person to goods, there’s no investment needed in expensive equipment, robotics or the technology to drive them. But equally, there’s no reliance on a technology-driven solution that may suffer from a single point of failure.

Certainly where you have a large warehouse, an abundance of SKUs and tight order fulfilment windows, person to goods is less efficient. It makes for more time spent travelling the warehouse, a greater likelihood of mispicks and a need for more staff. By using goods to person, there is naturally scope for increased productivity. Some sources quote that double the number of lines can be picked with this method. With such a massive reduction – and often complete elimination of – transit times, efficiency is bound to be boosted.

High density storage and an investment in equipment such as automated conveyors, carousels and robotics is certainly the way forward for today’s complex ecommerce operations.

If you would like to discuss picking methods and equipment with a Balloon One warehouse consultant, call us on 020 8819 9071 or get in touch for a quote.