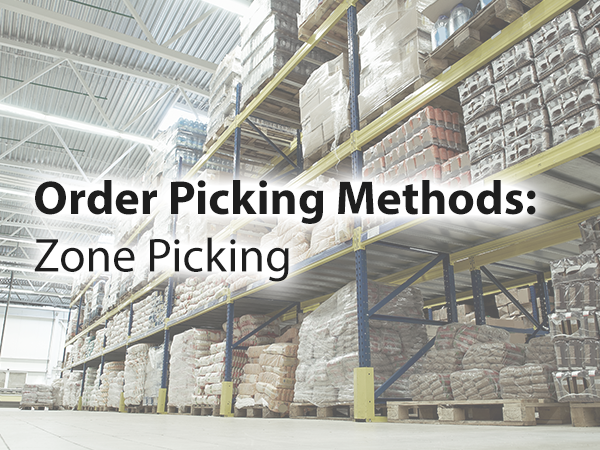 Warehouse picking is central to a distribution operation. Cutting the amount of time required to pick orders helps to keep costs down, and to therefore maximise income. In a previous post, we compared batch picking with wave picking. Today, we look at another type of order picking method – zone picking – to understand what its advantages and disadvantages are, and to identify which kinds of distribution operation it is good for.

What is zone picking?

In zone picking, a warehouse is split out into several zones. Each picker is then allocated solely to a specific zone. It is also sometimes known as the “pick and pass” method, as items are picked in one zone and then passed on to another.

When an order is received, it is checked by the warehouse management system (WMS) and the picking face for each SKU is identified and located. The WMS will then issue separate picking instructions for each zone for that order.

The goods are then picked by each picker in their own zone. Once all the parts of the order have been picked, they can then be amalgamated into their discrete orders and packed for shipping. This way uses a simultaneous picking method. But it can also be done sequentially. Sequential zone picking is sometimes done with a conveyor system, which passes each part of the picked order onto the next area, so that additional line items can be added.

What are the benefits of zone picking?

Zone picking allows for continuous picking to take place. With pickers operating in zones all over the warehouse, the area covered by pickers is minimised, thus speeding up the process and bringing an enhanced level of productivity to a distribution operation.

Because many pickers are picking at the same time, large orders can be very quickly picked. This means that orders can be shipped more quickly – as soon as the order pick is complete.

If you have specialised picking needs for different zones, you can also train pickers according to the zone they are allocated. For example, using zone picking might mean that not all your operatives need to be forklift trained; some can pick by hand, where only a few receive any specialist training needed for using materials handling equipment.

Zone picking also eliminates crowding and congestion. As pickers have discrete operating areas, they are less likely to get in each other’s way.

The segregation can engender in workers a sense of responsibility for their allocated zone, which boosts morale and pride in their work. And since pickers only pick items from their assigned zone, it allows for a degree of specialisation and familiarity with the SKUs that they deal with. Not only can zones be allocated according to skill level, but being assigned to a specific part of the warehouse enables the picker to develop a familiarity with certain products. As they become accustomed to their particular area, they are able to pick more accurately and at a faster rate.

What are the drawbacks of zone picking?

One of the disadvantages of zone picking is that the separate parts of the order need to be further collated. Without a conveyor system, this may mean an area of the warehouse needs to be dedicated to this, along with the allocation of staff members to carry it out. Of course, in many cases, the speed gains of using zone picking will outweigh any lost productivity associated with collating order segments.

Where orders aren’t picked by a single person, it becomes harder to allocate any responsibility where there are picking issues. This can be mitigated with a comprehensive WMS system that can track exactly which worker has picked each item. But in smaller operations without this functionality, a manual record of who has picked what may be too complex to implement.

Where demand is not consistent, some workers may be intensely busy while others are left idle. This can be alleviated by repeatedly rebalancing the workloads according to the day’s orders. But this does then negate some of the advantages of zone picking, such as worker specialism within an area, or familiarity with certain products.

Where workers are operating alone and without much interaction with colleagues, the isolation is not always good for morale. If the warehouse is large enough, with teams of workers in each zone, it’s perhaps not an issue. But in smaller operations with just one or two workers per zone, additional strategies for boosting morale might be needed.

Who should use zone picking?

From looking at the advantages and disadvantages of zone picking, it’s clear that it’s most appropriate for larger operations. It best suits those with a sizeable number of SKUs, a large volume of orders and a low to medium number of picks per order.

It also suits where a company has many differently sized items, or those with different storage or picking needs – for example, in situations where there are separate physical zones for items according to security measures, hazards or storage temperatures. A food and drink distributor, for instance, will have different areas for ambient goods, refrigerated items and frozen foods. It’s not efficient for a picker to pick an order from all three locations, putting on or taking off coats and gloves as he moves from one zone to another.

Equally, items within a shipment may be of different sizes, with some needing to be picked by forklift and others that can be hand-picked. Zone picking works well in these scenarios because different materials handling equipment can be reserved for use in some areas and used by specialists in those zones.

Zone picking works well where goods can be picked and placed directly into a carton or the final shipping package. So it’s also perfect for operations with smaller items that can be collated into final packaging that is portable through the warehouse.

Because it allows for an order to be picked quickly, zone picking works well where the despatch times demand that a large number of order lines need to be picked and shipped rapidly. It can also be amalgamated with batch picking to speed up an operation even more.

To find out more about picking methods and which is best for your warehouse operation, call us on 020 8819 9071 or get in touch.