AmazonFresh and the Ocado Smart Platform 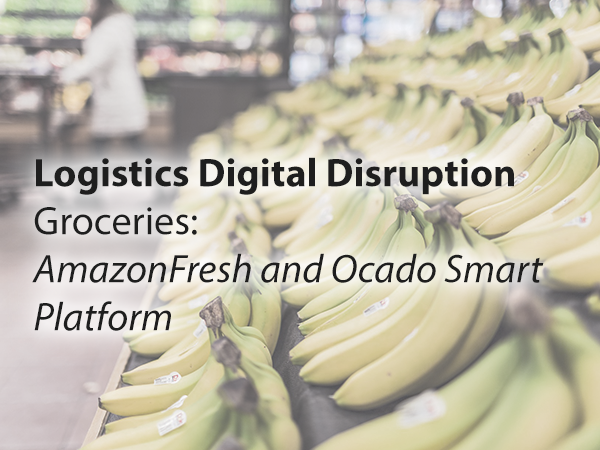 Posted at 17:14h in Uncategorised by Claire Kerr
610 Likes

Continuing our series of posts on logistics digital disruption, we turn attention now to disruption in the grocery market and how the buying experience is changing for consumers. This comes thanks to solutions such as AmazonFresh and the Ocado Smart Platform.

Whilst the Ocado Smart Platform seeks to revolutionise the grocery industry through the use of artificial intelligence, AmazonFresh is reshaping the consumer picking process by establishing itself as the online supermarket delivering fresh food at the customer’s convenience.

The Ocado Smart Platform is an advanced storage and automated picking system used at one of the company’s customer fulfilment centres (CFCs) at Andover, in Hampshire.

The facility went live in December 2016 and features up to 1,100 robots working on a grid roughly the size of a football pitch. The grid houses 250,000 storage locations, and the robots pick crates from this grid and take them to stations where they are assembled by packers into the customer orders.

Running three million routing calculations a second, the system directs the robots around the grid. They travel at four metres a second and can pick and pack a full customer order be in five minutes – many times faster than if done by humans.

The grid offers a dense storage system that maximises space utilisation in the warehouse. Coupled with the proficiency of the robots, Ocado’s automated fulfilment solution can prepare 65,000 orders a week, making it extremely fast and efficient.

All this has helped make Ocado the world’s largest online-only grocer. And with a second Ocado Smart Platform warehouse currently under construction – which will be three times the size of the one in Andover – Ocado is set to continue to dominate in online grocery distribution.

Ocado’s share price and valuation have been boosted by a recent partnership agreement with US food giant, Kroger, which plans to use the UK company’s technology in 20 distribution centres. With partnerships in Canada and France too, it seems Ocado is no longer just a grocery retailer. Employing 1,200 developers, engineers, data scientists, and robotics engineers, it is clear that it is fast becoming a technology company. Much like Amazon, Ocado is making a move to digitally disrupt its market.

Amazon has long been known as a digital disruptor. Not content with reforming the bookshop market, it is now the world’s largest online retailer, selling all manner of goods.

It entered the grocery market with AmazonFresh in 2016, offering grocery delivery in hundreds of postcodes across London and the Home Counties.

Amazon’s competitive advantage is its same day delivery offering, a feature that other UK online grocers struggle to match. While not available in all postcode areas, those that aren’t eligible are guaranteed next-day delivery.

It can also boast a huge portfolio of goods. It lists an unmatched inventory of 180,000 products, thanks to having struck a wholesale supply deal to deliver Morrison’s produce, and taking advantage of its ownership of the US company Whole Foods Market. It even supplies goods from specialty local shops and markets, such as butchery, fish, deli and bakery items.

In the US, Amazon continues to innovate in grocery delivery. It has launched AmazonFresh Pickup, a service that allows users to place an order, have it picked and packed and then ready in as little as 15 minutes. It’s a collection service, rather than a delivery one, with staff even loading the consumer’s goods into their car.

What’s the future for online grocery?

These businesses are changing completely the face of online grocery shopping in the UK. Their digital disruption brings huge potential for them to revolutionise the industry, transforming warehouse operations and reforming last-mile logistics.

There seems to be little slowing down of these constant developments and disruptions. Ocado has set the bar high with its futuristic method of picking and packing groceries. And while there’s no immediate indications that we will see the same system implemented across retailers, it’s certain that the focus must be on faster delivery times and cheaper produce. Whilst this has already been successfully realised by AmazonFresh, it is likely that future improvements and alternatives from both these and other companies will only jolt the market further.