Are you Ready for the Falsified Medicines Directive (FMD)? 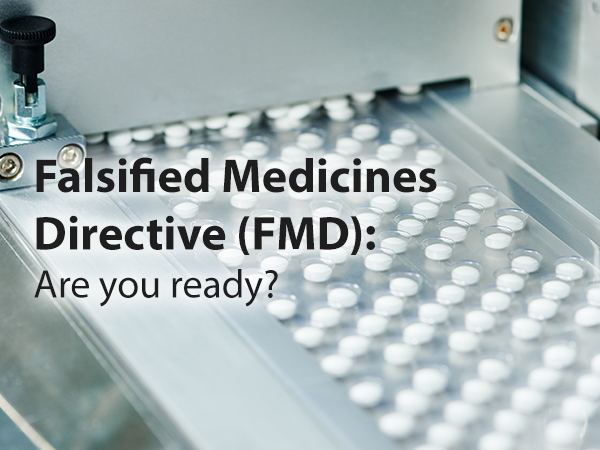 31 Aug Are you Ready for the Falsified Medicines Directive (FMD)?

Falsified medicines are counterfeited drugs sold as the real thing to unsuspecting members of the public. They present a risk to health and are of concern to both the pharmaceutical industry and to governments across the world.

Fake medicines not only cost the pharmaceutical companies substantial amounts of money, but they also pose a serious threat to human health. Falsified medicines may be entirely fake, with no active ingredients at all, or may contain incorrect dosages. Others have been found to contain dangerous impurities and toxic ingredients. These drugs not only fail to heal people, providing no medical or health benefits at all, but can also actively harm them.

The World Health Organisation estimates that 1% of all medicines in the developed world are counterfeit. And on a global scale, that estimate rises to 15-30%. The upsurge in fake medicines comes mainly from the fact that they are difficult to detect. But even when the perpetrators are caught, it seems that lenient penalties do not deter them from further counterfeiting activity. And with the growth of ecommerce, counterfeiters have an easy means to reach their millions of potential buyers.

To combat the threat that fake medicines pose, legislative bodies are now turning to technology to solve some of the problems. And this is where the EU’s new Falsified Medicines Directive, or FMD, comes in. Its aim is to put an end to falsified medicines, requiring companies in the regulated supply chain to improve their medicine handling procedures.

What is the Falsified Medicines Directive?

The FMD was initially adopted by the European Union (EU) in 2011 and, when finally implemented in February 2019, will drastically change the way medicines are distributed from manufacturer to pharmacy.

The directive mandates two new compulsory features that will allow for medicines to be checked and authenticated. The first is for tamper-evident packaging or features. And the second is for a unique identifier to be placed on product packaging. This will comprise a 2D data matrix code, along with some human-readable information.

The unique identifier (UI) encoded onto packaging needs to include:

The information is read by a scanner and allows medicines to be fully tracked and for their authenticity to be verified. Individual packets of tablets can be precisely traced through the supply chain.

From 9 February 2019, pharmacists will need to scan medicines to confirm their legitimacy before dispensing them to patients. From September of 2018, there will be a UK FMD system that will connect to the central EU FMD hub.

The directive also allows for the creation of a new EU-wide logo that will identify legal online pharmacies across the EU.

How will Brexit affect the FMD?

Britain is due to leave the EU around seven weeks after the FMD becomes implemented into UK law. So, the directive will initially be incorporated into UK law – as with all EU laws. And while Britain’s withdrawal from the EU may mean that our laws change over time, it’s unlikely that any changes will take effect in the short term.

What should medicines distributors be doing now?

With the deadline only a few months away, most medicines distributors will have their plans in place. However, earlier this month, the European Medicines Verification Organisation warned that nearly 1,500 companies had failed to begin working with them yet, and that they were therefore at risk of failing to comply with the FMD in time. As it takes around 6 months just for the initial on-boarding phase, those distributors really need to act quickly.

Most distributors will want to integrate new solutions with existing WMS or ERP systems to ensure consistency within their operations.

Balloon One has experience of integrating their ERP and WMS systems for a number of pharmaceutical companies. If you would like to know more, call us on 020 8819 9071 or get in touch.