With distributors and logistics providers constantly looking to shorten delivery times and reduce costs, it’s no surprise that innovation into automated methods of delivery is a prime focus.

The rapid advancements in autonomous vehicle and drone delivery technology mean unmanned home deliveries may no longer be the stuff of science fiction. Instead, their reality seems to be very much on the cards. But how long will it be before these technologies are rolled out more universally? 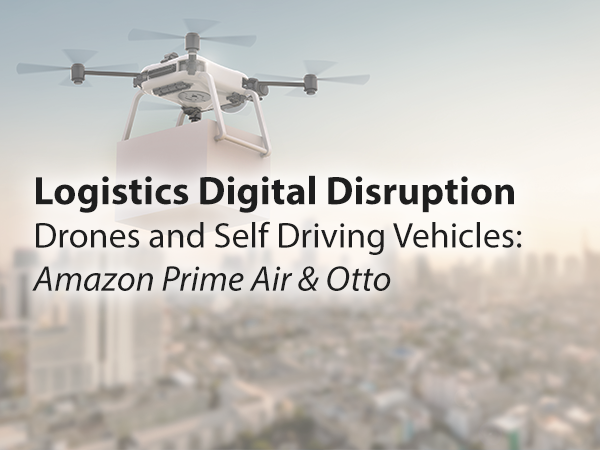 For many, the only drawback of internet ordering is the time it takes to receive your package. But using drones removes this hurdle, with packages theoretically able to be despatched and delivered within the hour.

Delivery by drone is obviously faster than ground delivery, as there’s no traffic to negotiate. Drones can travel up to around 100 mph, meaning more deliveries can be made per hour, making it a highly cost-effective delivery method. One drawback, however, is that they are limited to handling only lighter packages – up to around five pounds in weight for current unmanned aerial vehicles (UAVs).

Parcel fraud is another concern. If parcels cannot be handed over to the designated recipient or posted securely through a letter box, they are prone to theft or misdelivery. And strong proof of delivery will be needed for drone delivery to become widely accepted. To overcome this issue, WorldPay has protoyped a special delivery mat that acts a bit like a mini helipad. They store the customer’s credit card information, which can be accessed and verified by a delivery drone as part of an approval process as it approaches the delivery destination.

In the UK’s crowded skies, widespread drone use presents a potential problem with air traffic. Ninety-two near-miss incidents were reported in 2017, and drones have previously even been reported to have collided with planes.

The 2016 Drone Code, published by the Civil Aviation Authority, went some way towards regulating drone use. But more recently, NATS, the UK’s air traffic control service announced plans for an overhaul of the drone system that would allow drones to safely share airspace with larger aircraft. The changes point to drones no longer needing to be flown within the line of sight of their operator, a move which would open the market up to commercial delivery by drone. Trials are currently taking place and it’s likely that routine, out-of-sight drone operations could begin in 2019 or 2020. 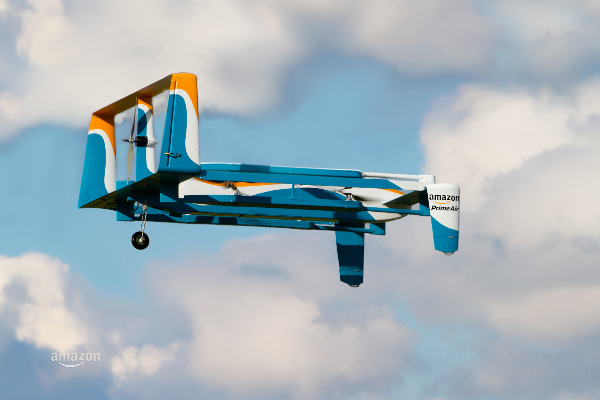 Amazon famously delivered its first package by drone in late 2016, with the first customer of Amazon Prime Air receiving their delivery within 13 minutes of placing the order. Amazon is trialling the operation in the UK and hopes to deploy it in a number of countries once regulatory restrictions allow.

In May 2018, the US approved a number of pilot drone-testing programmes. One project involves FedEx delivering packages between the airport and locations in Memphis. Another is for Uber, which is developing air-taxi technology to deliver food by drone in San Diego.

UPS claims to have been testing drones for a number of years. A recent programme tested drone deliveries launched from the top of a delivery truck. The drone makes a delivery, then returns to the vehicle while the driver continues on to make another delivery.

Not all autonomous delivery vehicles fly. Starship Technologies – created by the cofounders of Skype – has developed a self-driving, ground-based vehicle that can deliver within a two-mile radius. It only travels at walking pace, but with a payload of up to 40 pounds, it can carry significantly more than its airborne counterparts.

The company has launched commercial partnerships in the UK, Germany, Switzerland, mainly with campus-based companies and academic institutions, for the delivery of food and other items. While currently a “closed” delivery system, just operating in a restricted campus setting, there is potential to roll the method out to logistics companies.

Of course, larger driverless vehicles have been in development for years. Tesla and Google – while not pioneers of the technology – are just two of names hyping things up in the industry and testing prototype cars.

While largely focusing on passenger vehicles, it’s not just cars that have been developed. Delivery vans and lorries are in testing too.

Rather than develop new vehicles though, self-driving technology company Otto chose instead to invent technology that could be retrofitted into trucks. Otto was acquired by Uber in 2016, and now forms part of the company’s Advanced Technologies Group. While Uber will no doubt want the technology to help it develop driverless taxis, the opportunity to advance the logistics market is still there.

Autonomous vehicles can run 24 hours a day. Being permanently operational makes delivery faster and replacing humans saves money on wages – which often represents half of a company’s expenditure. Driverless vehicles bring increased efficiency and potentially reduced delivery times, all of which are an attractive proposition to logistics companies and distributors looking to reduce costs and meet ever more demanding customer delivery expectations.

What’s the future for autonomous delivery?

So, will we soon see our motorways taken up with autonomous delivery fleets and our skies filled with drones?

Not quite yet, it seems. BI Intelligence believes that technical issues, regulatory barriers and limited consumer acceptance will mean that mass adoption of drone delivery will not happen until after 2020. But after that, things could ramp up quickly. Worldpay estimates that, “By 2024, 80% of all deliveries will be made by autonomous craft.”

With the world’s largest ecommerce retailer, Amazon, backing the technology, then it certainly seems to be an area that will have increasing significance. Amazon’s core business necessitates a high demand for shipping, so it’s natural that they would look to innovate in this sector, seeking ways to integrate self-driving trucks into their delivery network.

The UK parcel delivery market was worth £9.7bn in 2016, with around 2.5 billion parcel deliveries made. It’s a market that is only growing and Amazon’s rapid and low-cost delivery offering will likely continue to disrupt the logistics market, eating further into the market share of the main players like Yodel, Hermes, DPD and even the Royal Mail.