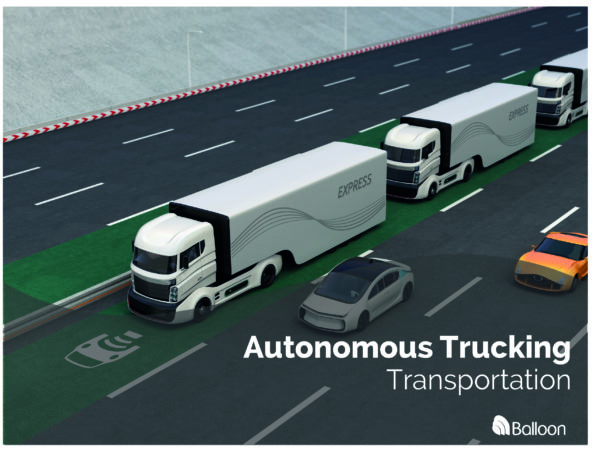 Posted at 12:07h in Blog, Distribution by Claire Kerr
1 Like

Autonomous trucking – to a degree – is a current reality. It’s obviously not yet at the stage where you can simply load a truck then push a button and send it on its way to autopilot itself to its destination. But for many in distribution and warehousing, what is already available for autonomous driving lorries already represents a huge leap forward for the sector.

We look at the current status of autonomous trucks and ask what their future could be.

How does autonomous trucking work?

There are various levels of autonomy in driving – from 0 to 5. These are set out by SAE International in their standard J3016.

Level 0 has no automation at all; the driver controls everything to do with driving the car or lorry.

Level 1 is seen in everyday trucks and includes driver assistance functionality like cruise control, parking assistance and lane keeping assistance. At this level, a driver is required to still largely be in control of the vehicle.

With Level 2, called “hands off”, the system takes more control of the truck, including accelerating, braking and steering. However, the name is a little misleading as the driver still needs to be fully aware and ready to take more control if needed, and some systems even require a drive to keep their hands on the wheel to demonstrate this readiness.

Level 3 is known as “eyes off” and lessens how much attention the driver needs to pay to the road. The truck largely propels and manages itself, but a driver must still be prepared to intervene in case the system fails or cannot respond as it should. The 2020 Audi A8, although not a truck, is the first mass-production vehicle expected to incorporate Level 3 technology, which can control the car driving up to 60 kmh in traffic jams on multiple lane roads.

Self-driving at Level 4 is highly automated and is being tested by manufacturers right now – both with self-driving cars and trucks. This is known as “mind off” and means that a human does not need to be present at the wheel, nor monitoring the driving in any way.

Full autonomy, with no human involved in the car at all, nor controlling the car in any way, is level 5. The media talks as if this is coming soon, but in reality, the safety considerations are still too troubling and there have been fatalities where the vehicles have been deemed to be at fault while running on full autopilot. Those developing the microchips, sensors, artificial intelligence and machine learning that will enable full autonomy believe it may be another 30 years before this level is realised.

Level 4 to 5 is the sort of level that autonomous trucks could run at in the coming years. At Level 4, a human would still need to monitor the drive and take over if necessary. But Level 5 would allow for ‘platooning’, whereby a number of trucks form a convoy. The lead truck would still have a human in the cab, but the following trucks could digitally tether closely behind each other in convoy formation.

Could autonomous trucking benefit your business?

A key benefit of using autonomous trucks is that it reduces the human element costs. With no need for drivers, there’s no driver’s wages. There’s also no need to stop for a driver to have a rest, so shipping is faster and more cost effective.

Another cost saving comes with fuel. With autonomous driving, fuel is conserved because the trucks are driven in the ideal manner and follow the optimal delivery routes.

And without drivers, the chance of human error ceases to exist, meaning fewer accidents. In turn, this reduced the costs associated with them, like time off the road, fines, insurance penalties and premium hikes.

Costs could be reduced too with the application of machine learning to the driving process. In-built algorithms could choose the correct routes, and also learn from previous situations. Artificial intelligence might also allow trucks to determine their own routes, based on traffic conditions or to avoid accidents and so on.

If you’re in the US, or deal with distribution there, then you’ll be aware of the issues American distributors have with labour shortages. The lack of drivers has meant logistics providers overloading trucks and pushing their drivers to their limits. Autonomous vehicles will ease this worry considerably and will see more shipments getting to their destinations on time.

What’s next for autonomous trucking?

Whether completely autonomous, self-driving trucks are a short-term reality is still up for debate.

But many companies are testing and developing autonomous lorries already. Starsky Robotics has tested driverless trucks in the US and is aiming to deploy them commercially in around two years’ time. And Embark Trucks, TuSimple and Tesla are all developing solutions.

Large landmasses with huge distances to cover will likely benefit first. In places like Russia or the US, there’s land aplenty to even create new highways that are purpose-built for autonomous trucks, with depots and warehouses built alongside. In the UK and Europe, where land is less freely available and roads have organically sprung up over time and had to be built around obstacles like rivers, hills and ancient buildings, the restrictions of the infrastructure may hinder development of autonomous trucking for a while longer.

While you wait for self-driving trucking to come of age, and for a fleet of lorry-driving automatons that can deliver your parcels, why not try out Springboard Delivery. It’s a cloud-based routing and vehicle tracking system that gives paperless proof of delivery capture on multiple Android devices – perfect for managing your in-house fleet.